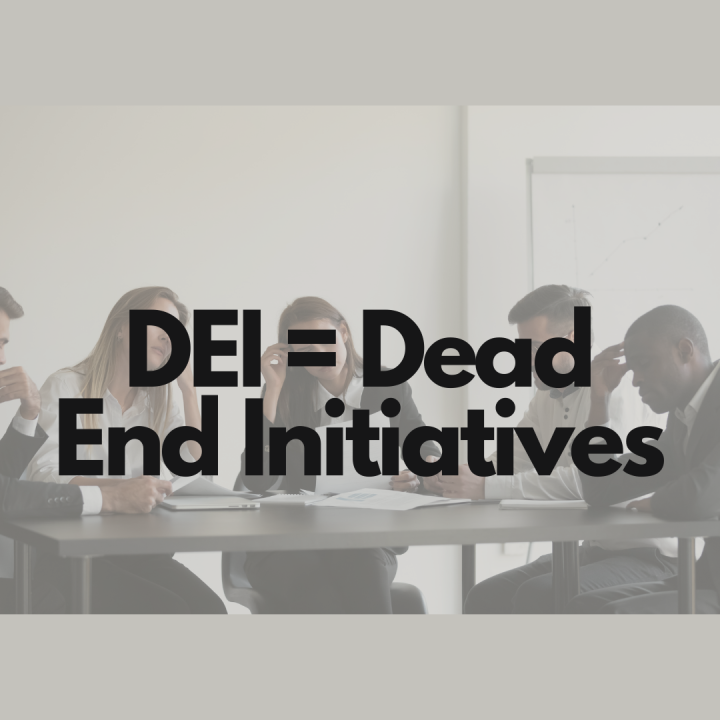 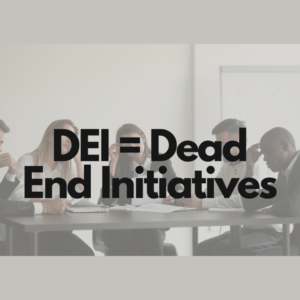 That’s right. I said it. When most of us think of DEI, the first thing that comes to our mind is Diversity, Equity, and Inclusion. DEI became a buzzword, a phenomenon really, after the murder of George Floyd. Many organizations reckoned that they had done little to address systemic racism and create equity for the black employees and other marginalized groups in their organizations. Hence, DEI became the number one priority for 2020.

However, here we are approaching the second anniversary of the murder of George Floyd, and many of us are asking the question, “has much changed?” Sadly, the answer is no. Instead of DEI standing for Diversity, Equity, and Inclusion, it now stands for Dead End Initiatives. Here are five reasons why.

Tsedale M. Melaku and her co-authors helpfully define allyship as “a strategic mechanism used by individuals to become collaborators, accomplices, and coconspirators who fight injustice and promote equity in the workplace through supportive personal relationships and public acts of sponsorship and advocacy.” In response to the systemic inequities that lay hidden in plain sight, individuals and organizations have become “allies.” But according to a study by Leanin.org, “while a majority of employees think of themselves as allies, relatively few white employees are performing basic allyship actions, such as advocating for racial equity or mentoring women of color.” Organizations are outwardly supporting their marginalized workforce, but internally, these same groups are still seeing little to no upward mobility, disparities in pay, and work in toxic work environments. So, what do you do instead? Offer Ourship training. Ourship training goes beyond performative allyship to actionable ourship.

Those marginalized employees who have seen their way into the C-suite are often hired into Chief DEI positions. However, their roles are more performative at times, a position filled with meeting a specific image. You can tell it is a hire for “appearances only” because these Chief DEI officers are often hired with no autonomy, no budget, and a small team. Chief DEI officers must frequently jump through several hoops just to get their initiatives approved and funded, with many initiatives proposals being denied or brushed off as a good idea to implement at a different time.

Speaking of the Chief DEI Officer, many CEOs believe that the Chief DEI role is the only leadership position committed to this work. WRONG! A Chief DEI officer should be there for guidance, advice, and partnership with internal and external stakeholders. However, the truth of the matter is that to create equitable work environments, it takes the commitment of every single senior leader in the organization. No one role can be the single answer to this work. Without commitment on every level of the organization, these initiatives are sure to die.

ERGs are voluntary “employee-led resource groups” whose intent is to provide support and help for employees who share a common characteristic, which is usually race, age, lifestyle interest, or ability. As great as this seems, it is problematic in those organizations that are not committed to their DEI work. These volunteer groups have been asked to carry the entire DEI framework on their shoulders. The problem is that most organizations do not offer additional compensation to your salary or allocate from your regular work schedules to conduct this critical work. Additionally, organizations that rely on ERGs to lead DEI work ask the same group that inequitable systems have oppressed to fix the systems. This work becomes exhausting for many marginalized employees because they’ve been trying to voice their concerns and offer solutions for these broken systems for years, yet their voice has been continuously silenced. They are finding no difference in doing this behind the guise of an ERG. Again, these groups are working with no time, no budget, and no real commitment from senior leadership.

From Dead End to Spot On

If you do not see the DEI plan results you committed to two years ago? Now, you know why! So, let’s make your dead-end initiatives spot on. Commitment from every single layer of your organizational culture is vital. DEI work is not a one-person job, nor is it the job of the very people who have been oppressed by the systems you’re attempting to dismantle. Don’t engage in this work blindly. What’s working for one organization may not work for the next. Assess your culture to determine where you should be focusing and map out a viable strategic plan. Don’t promise more than you can commit to. One small step towards inclusion is a giant leap for humanity.

About the Author – Natasha Bowman is the President of Performance ReNEW and author of You Can’t Do That at Work! (2017) & The Power of One: Leading with Civility, Candor, and Courage (2022). 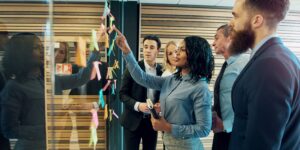 In 2022, Allyship won’t be enough. We need something more

In 2022, allyship won’t be enough. We need something more When Doris Miller — a son of sharecroppers and grandson...